Jamie Margolin is a Colombian-American organizer, activist, author, public speaker, and Film & TV student (2024). When she was 15, she co-founded the international youth climate justice movement called Zero Hour that led the official "Youth Climate Marches" in Washington, DC, and 25+ cities around the world during the summer of 2018. Jamie is also a plaintiff on the Our Children's Trust Youth v. Gov Washington state lawsuit, Aji P. vs. State of Washington, suing the state of Washington for denying her generation their constitutional rights to a livable environment by worsening the climate crisis.

The Teenagers at the End of the World

Young climate activists like Jamie Margolin are building a movement while growing up — planning mass protests from childhood bedrooms and during school.

Get A (Print) Copy to Own

Note: Virtual events will be recorded, so if you can't attend live, don't worry! Thank you for completing the survey upon viewing the event recording.

“...the culture has to change first before the laws change. ... Art influences society by changing opinions, instilling values, and translating experiences across space and time. Art is a way of taking up space and reclaiming narratives that are never told otherwise.” (p. 70-71)

“Using your voice as a writer can be the most accessible way of getting your story out into the world." (p. 23)

The Substack platform enables activist writers to digitally published articles on their topic.Some articles are open access - others are behind paywalls.

Read now: HEATED: What can I do? Anything. The battle for a livable future is a battle against fossil fuels. Right now, it's all hands on deck.

"... all they did was bring forward the ugliness of the violence that Black people in America face every day. They did not disrupt the peace; they just brought to the public's attention that there was never any peace to begin with.” (p. 97)

“It is critical to ground yourself in what you're fighting for before jumping in headfirst and to continue to keep yourself grounded throughout the whole journey. Having a clear reason and intention for what you are doing helps lead you in the right direction." (p. 1)

“Oftentimes, our voices are not heard on the news, and many of us are under voting age, so our needs are not heard through the political system." (p. 24)

“Every single action you take going forward needs to serve your why. That's how you're going to be successful. That's how you're going to stick with it in the long run and make that change you have been striving for." (p. 2)
"There is (usually) no such thing as 'not having' time. We all, when you boil it down, have time. Whether we prioritize it and what we put that time to is up to us." (p. 152)

Outside resources to guide and inform.

To save: download the zip file, drag (extract) the files to your computer, then upload wherever.

Link to refer back to: LoneStar.edu/UP-ReadUP (redirects to this page; looks more official)

Quick (under 2 minute) demonstration of adding a LOR (Learning Object Repository) object to a D2L module.

Just search for ReadUP to find the object! 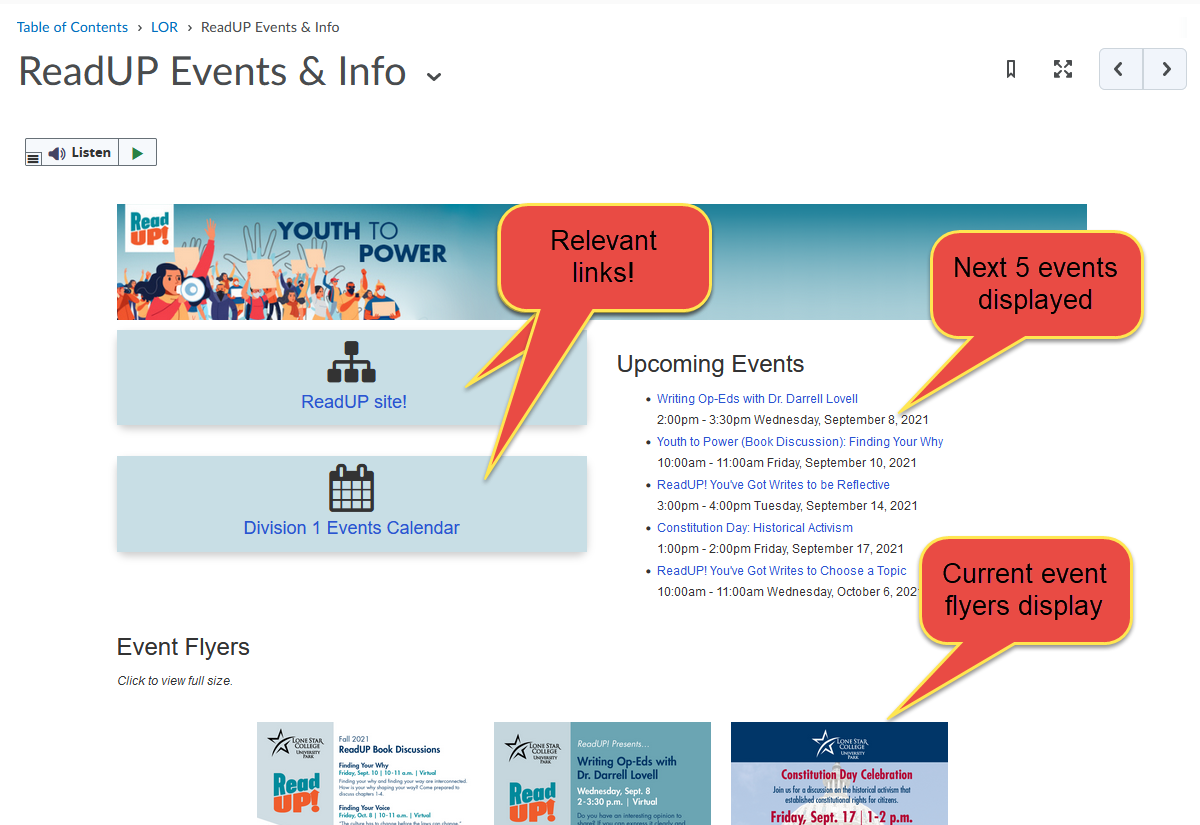