A guide to writing and citing in MLA format.

Referring to Specific Parts of a Source

Every citation on the Works Cited needs to be used at least once in your paper.

Every source documented in your paper should have a  Works Cited entry.

If the original source has page numbers, include the relevant page, too.

Experts agree that "the moon is comprised of green cheese" (Sousa and Thompson 43).

Lunar geologist Dr. Margaret Carter reports that the moon is made of cheese. Carter also notes that it is probably a blend of cheddar and gruyère (47).

If you mention that author's name in your actual sentence, you must contextualize who they are. Putting them in your narrative indicates they're important, so you need to clarify why. Conversely, if the author is not someone significant, don't name them in-text: use a parenthetical citation instead.

Others argue that the moon is actually made up of various rocks (Stark et al.). The SSR researchers Carter, Sousa, Thompson, and Dooley further reveal that these rocks are inedible (88). Everyone is disappointed by this development (Stark et al. 198).

In MLA, when there are 3 or more authors, you can abbreviate their names to just the first author "et al." ("and the others") in your Works Cited and your in-text citations. However, if you're going to name the authors in-text, you must instead write out all their names the first time you reference them -- no "et al."

If you refer to them in-text again later on, you could then say Carter et al. since you previously established who is in that group. Of course, you need to make sure you don't have any other citations that could be a "Carter et al."

Experts agree that "the moon is comprised of green cheese" ("Moon Analysis").

Author names are typically the first part of the citation, but if you have a source with no named author, the article title becomes the first part.  You don't have to use the full title -- just the first word or two will be sufficient.

Your in-text citations are, essentially, an abbreviation of your full reference that makes it easy for your reader to very quickly find the citation by skimming the left margin.

Experts agree that "the moon is comprised of green cheese" (Sousa and Thompson 43).

Sousa supports this theory but adds that "the core could be made of white cheddar" as well ("Deeper" 374).

Quote sandwich: You should always have your own words framing the quote text, either before it, after it, or both. Use direct quotes sparingly in your paper and only quote the minimum you need to make your point.

Lunar geologist Dr. Carter reports that the moon is made of cheese (47). Carter's colleague Dr. Slate has further evidence that is made of brie and gouda in particular (Moon and Crackers 174, 176).

Though written essays are kind of the default format -- or at least, incredibly common -- you do still need to worry about citations when creating presentations, movies, infographics, or other types of works! The only thing that doesn't apply is all the 'Times New Roman size 12 double-space' formatting rules.

You do also have more flexibility in how and where you include citations, too!

You can use traditional parenthetical citations, especially if you've used multiple sources on one slide. 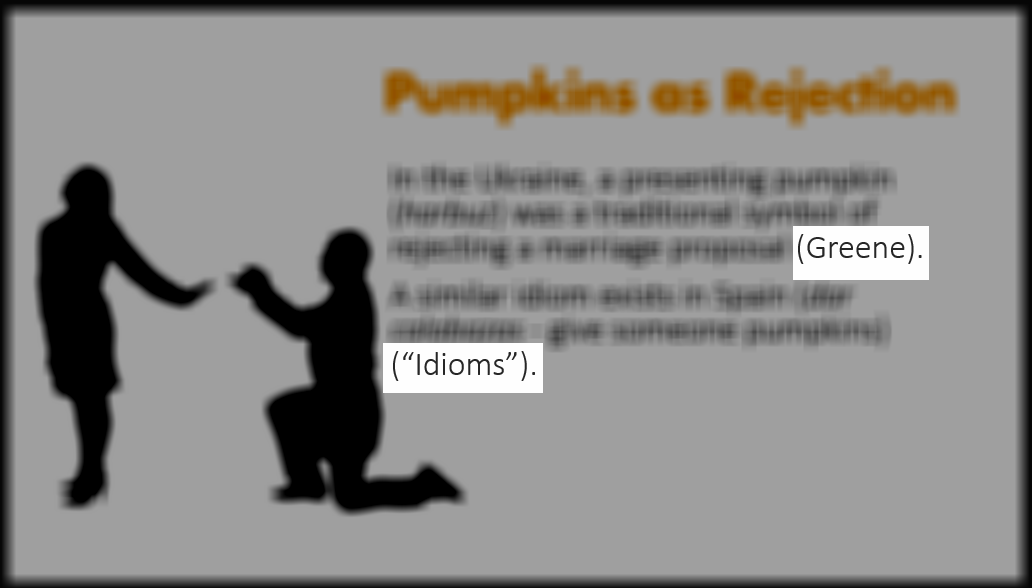 You can also go less formal [unless your professor has said otherwise!] by tucking the citation into the corner of the slide (Greene). You even have the flexibility to include extra info that MLA wouldn't normally allow but can help contextualize the source (Green, NPR Morning Edition). 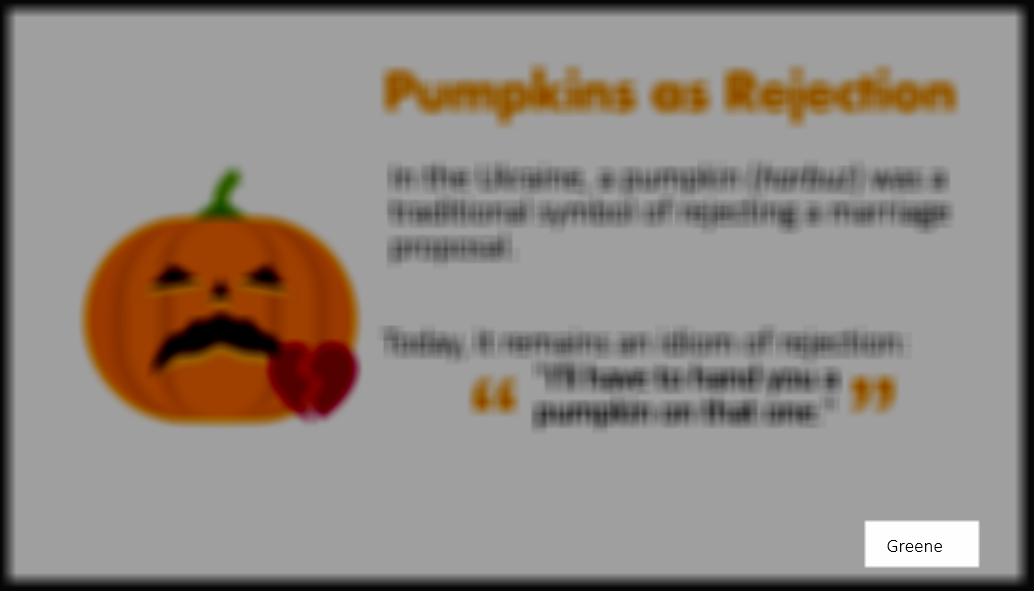 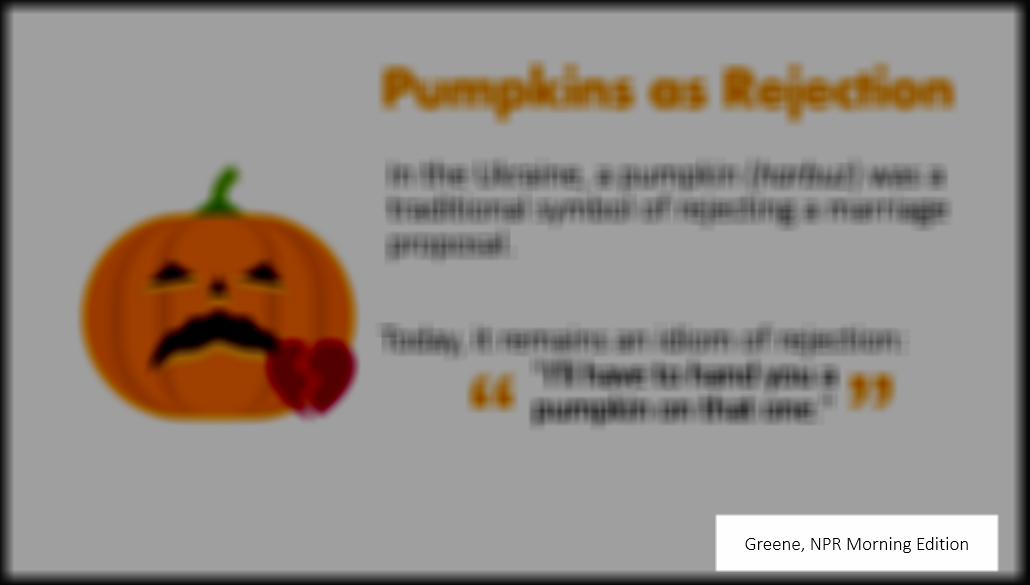 You must also include a Works Cited slide! We could create hanging indents, but it's not strictly necessary. A bulleted list might also work in this situation. 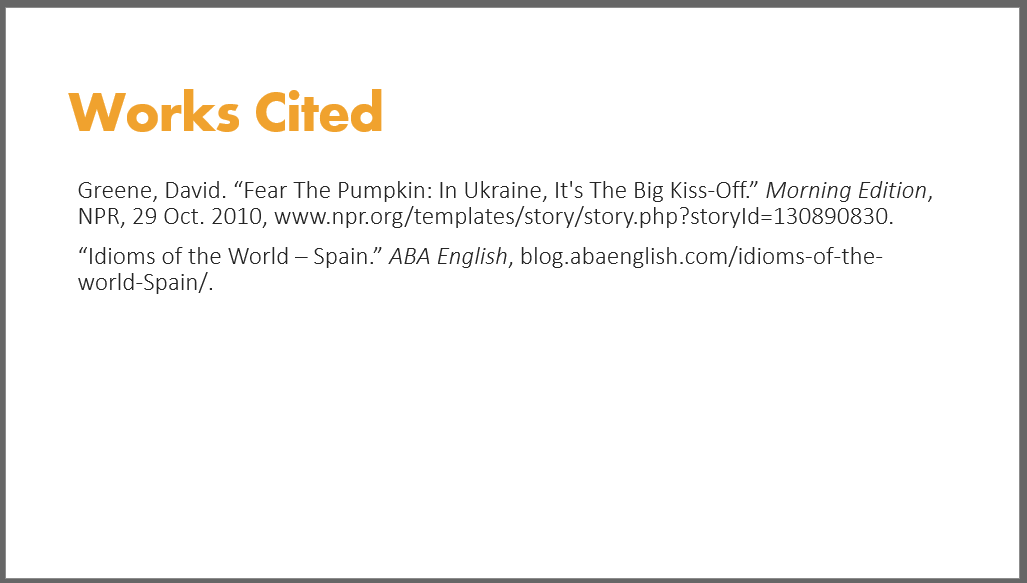 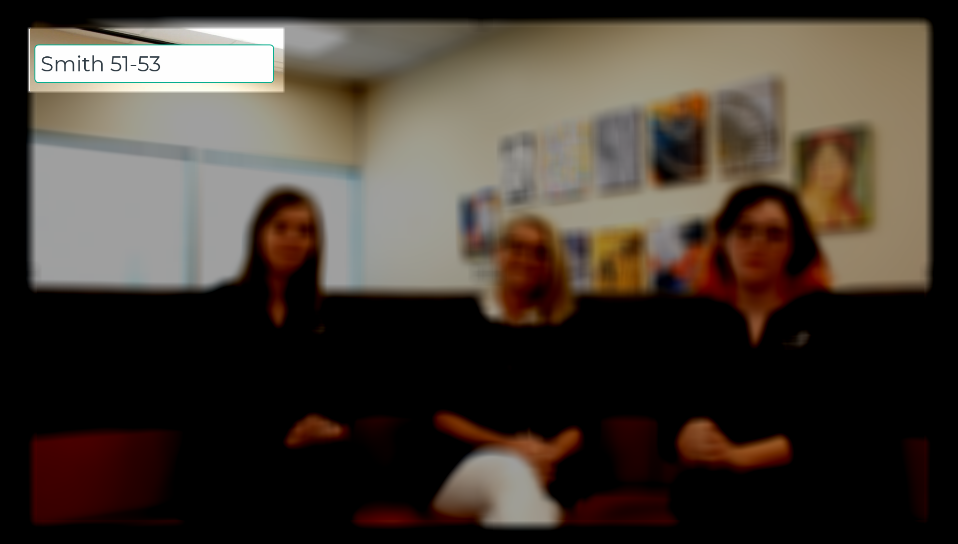 You can add a formal parenthetical citation at the appropriate times in your video in some corner of the video.

There's no rules about size/font/format! Just pay attention to how it contrasts to your video's background.